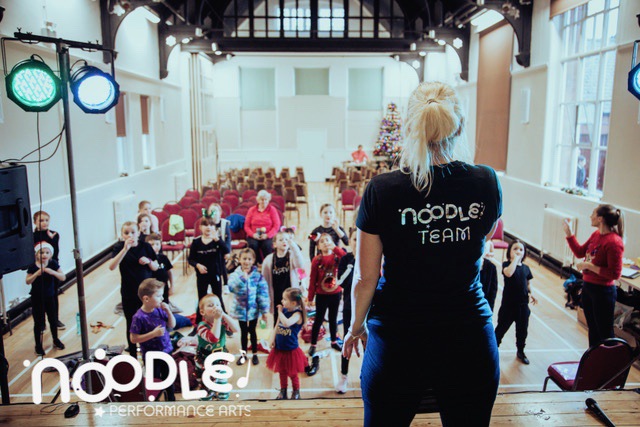 One thing children understand much better than adults is the importance magic plays in their lives.

Being able to use your imagination, suspend your disbelief and pretend to be something else completely different are important skills which often become lost as we get older. However, getting involved in the performing arts helps nurture this natural sense of creativity and the idea that anything is possible.

Here Cat Allen, director of the franchise Noodle Performance Arts in Cheshire explains how passing on her love of performing to children allows her to keep the magic alive.

“Over half term, I had the pleasure of dressing as Professor McGonagall for a day. Snape and I sorted students into Hogwarts houses, made patronus charms, played games of Voldemort Wink Murder, trained in Quidditch and I had a thoroughly fantastic time.

I am a 41-year-old mother-of-two and I run the Noodle Performance Arts franchise in Cheshire but I loved it, maybe more so than the kids. Why? Because I got to play, to pretend I was magic, even saying some ‘spell like’ gobbledegook to mystically open their crisp packets at lunchtime. In the words of Potter himself, ”I love magic”. I could immerse myself entirely in someone else’s creation. Is that why Rowling’s novels have such appeal amongst kids and adults alike? Probably. There’s a hidden wizard in all of us.

Somehow though, as we travel along the road, that wizard disappears, becomes more cautious, gains knowledge and ultimately, develops The Fear.

As an 18-year-old wannabe, I auditioned for Les Mis in Manchester on a whim. I had no formal training then, just a Performing Arts A-level and an ambition. I did better than expected, going to London numerous times before they called me out. I wore the same shabby ‘lucky jumper’ each time and didn’t care that my makeup wasn’t perfect. Not like the professionals I was up against, they were pristine. With each visit, the panel got larger with influential names I should have noted but didn’t. I was green, naive and just happy to be there.

Skip to 2000 and I was graduating from drama school. Fellow students delighted in pointing out where famous agents were sitting in the audience. I closed my ears. I developed The Fear. It wasn’t dressing up and playing anymore. It was real life and the rent depended on it, like it did for those pristine professionals three years before. As adults, that fearful wizard continues to censor us.

A child’s wizard however, happily, is thoroughly at large. We play a game in class called ‘Yes, And’. The aim is to tell a story without blocking an idea or stamping on someone else’s imagination. I explain to the kids, theatre is a magical place, full of boundless possibilities, yet my teacher and I often share an alarmed glance across the circle as a child innocently suggests murder or, less innocently, poo. The Fear Wizard’s instinct is to jump in and remedy it but that defeats the lesson we’re teaching. The trick (magic or not) is to play safety net for the moments when they fall, but to let them go on believing for as long as possible. There is enough real life to deal with outside the drama studio and years to grow into it. Inside it should be safe and fun and magic.

We did a Superhero party for a boy of six recently whose friend said ‘Spiderman doesn’t exist.’ Harrison’s answer was simple; “Yes he does, I’ve met him.”